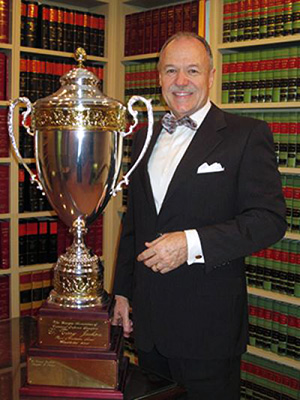 Doug Peters was recognized by his peers for passion and excellence in criminal defense. At the 2013 Winter Conference of the Georgia Association of Criminal Defense Lawyers held at the State Bar Headquarters in Atlanta, Peters received the “G. Terry Jackson Friend of the Constitution National Award.”

Pete Donaldson, past president of the Georgia Association of Criminal Lawyers, stated that the Association conducted a national search for a recipient who was not only an attorney actively engaged in criminal defense in private practice, but who was also willing to take on unpopular cases and who displayed a commitment to continuing legal education.

The association invited Peters’ partner, Jason Sheffield, to participate in the presentation of the award. Of his partner, Sheffield stated:

“Doug Peters is an unbelievable lawyer. Intuitive, intelligent, creative, visceral, powerful, compelling, and compassionate. In the last 35 years, Doug has defended people in the most unpopular cases imaginable. People whose lives were totally destroyed by one side of the story. Courtrooms filled with angry hearts and angry eyes. But somehow juries have found a voice of reason in Doug, a light of truth in his humble principles, in his way at looking at facts so honestly and clearly. Time and time again, juries have returned verdicts in Doug’s cases that have expressed their belief in Doug’s clients’ innocence.”

Peters responded that he was deeply honored to receive the recognition and spoke of his admiration for G. Terry Jackson and the standards that he set for lawyers in their practice. “Courage, hope, and a willingness to face fear in the battles that we fight. These are all standards that we aspire to attain as criminal defense lawyers. G. Terry Jackson was willing to take on the most unpopular cases. That helps in the representation of all unpopular defendants and that is the example that Terry set for all of us. I feel very privileged to be a member of the Georgia Association of Criminal Defense Lawyers where we strive together as a team to learn to practice with these ideals in mind, and I am truly touched to be honored with this award in Terry’s memory.”