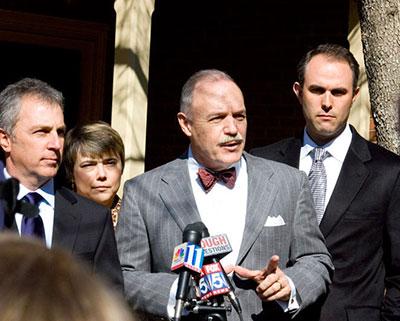 Attorneys Douglas N. Peters and Robert G. Rubin of Peters, Rubin & Sheffield are disappointed that the preliminary hearing for Neuman has been cancelled.

“We were looking forward to evaluating the evidence the state was going to present at the hearing, and having an opportunity to test the truth of that evidence,” said Peters. According to Peters, he was prepared to cross-examine the state’s witnesses and present evidence of his own.

Neuman is charged with murder for the alleged killing of Russell “Rusty” Sneiderman November 18 outside of Dunwoody Prep after Sneiderman dropped off his 2-year-old son at the pre-school. Neuman was arrested January 4 and remains without bond in the DeKalb County Jail.

“An indictment is not evidence of guilt,” stated co-counsel Rubin. “The grand jury hears only the prosecution’s version of the evidence. Neither Mr. Neuman, his witnesses, nor his counsel are allowed to be present at the grand jury proceeding.”

Peters said the defense team will continue to collect and review evidence and that they are not deterred.

“Despite not having the preliminary hearing, we will press on gathering all of the facts and assisting Mr. Neuman in his defense. Again, it is imperative that no one rush to judgment, and that the legal process is allowed to run its course,” said Peters.

Doug Peters, Past President of the Georgia Association of Criminal Defense Lawyers, and Bob Rubin, Adjunct Professor of Criminal Litigation at Emory Law School, bring a combined 60 years of experience as proven trial and  appellate lawyers. They are known for thorough investigation, analysis by the most reputable and highly acclaimed experts, and passionate persuasion in the courtroom in the representation of their clients.