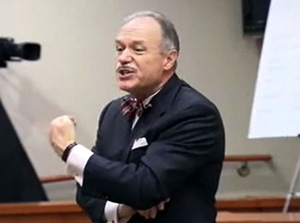 Doug Peters accepted an invitation from the California Public Defenders Association to speak at their winter conference held on December 7, 2013 at the Seven Seasons Hotel in Palm Springs, California. The conference was attended by criminal defense lawyers working in the statewide California Public Defender Offices as well as criminal defense attorneys in private practice from throughout California. The conference provided specialized instruction on “The Defense of Sex Crimes” with his lecture addressing the unique issues criminal defense lawyers encounter when the alleged victim is a child. Those in attendance at the conference received copies of excerpts from his book, “The Defense of the Child Molestation Case in Georgia.” He lectured from chapters in his book addressing investigation, trial techniques, presentation of expert testimony, and “successful theories of defense.” He stated that trying cases involving allegations of child sexual abuse proceed under statutory law and case law unique to the states in which they are prosecuted; however, the techniques of successfully defending against false allegations of child molestation need to be understood by lawyers in all states who have the responsibility of defending these incredibly serious allegations.

Introducing him at the conference was well known trial consultant, Toni Blake, of “Second Chair Services” from San Diego, California. Ms. Blake, who assists lawyers defending clients accused of child abuse throughout the United States, informed the attendees of her history of working with Doug on six different cases dating back to 2004….all of which she stated “Doug Peters won.”